Sharp increase in trade drove economic momentum in the first quarter, the ANZ Stateometer shows, despite slew of challenges.

Economic momentum across Australia’s states and territories shook off some tough conditions in the first quarter of calendar 2022, the ANZ Stateometer found, thanks largely to a sharp increase in trade as Australia’s borders reopened.

The ongoing COVID-19 pandemic, the crisis in Ukraine and flooding on the east coast all threatened to impact momentum, but Australia entered the June quarter on a solid footing amid resilience in consumer demand and continued strength in the labour market.

New South Wales and Queensland were among the top performers in the period, reflecting strong trade momentum for both states as borders reopened. This also benefited Victoria.

Economic momentum across Australia’s states and territories shook off some tough conditions in the first quarter of calendar 2022, the Stateometer found.

A sharp increase in trade as Australia’s borders reopened was the major driver.

You can read more in the body copy.

Like most of the world, inflation is becoming an issue across Australia’s states and territories. Households and businesses are feeling the pressure, and real wages are falling.

In 2022, ANZ Research expects wages growth to accelerate on a nominal basis; in real terms, wages will continue to fall for some time.

There are, however, airbags in place for inflation and rate impacts, with the Reserve Bank of Australia expected to deliver around 200 basis points of cash rate hikes by the middle of 2023. On an aggregate basis, households are well placed to absorb those hikes, given higher savings levels and the strong employment and wages outlook. 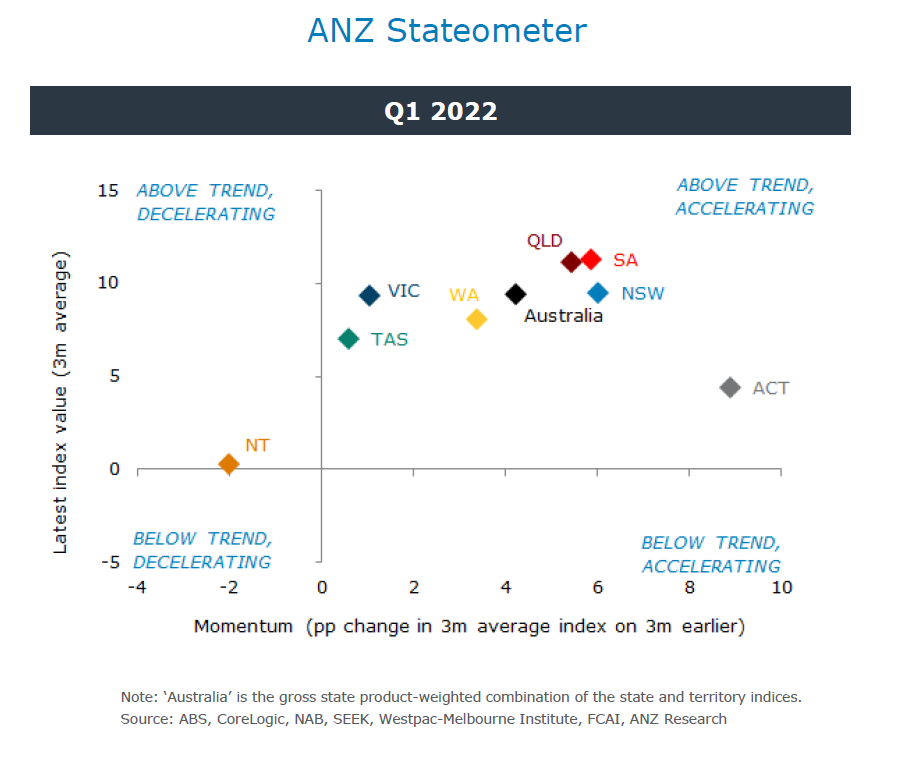 The ANZ Stateometer showed a rise in NSW’s economic momentum in the first quarter, with the index slightly above the rest of Australia. Victoria’s economic activity was robust, with an increase in trade partially offset by lower business, housing and labour components.

In Queensland, economic momentum accelerated in the first quarter, with all five components above trend, despite widespread flooding during the period.

SA’s economy remained robust, with the index higher than the national average. The labour component rose, even in the face of the highest unemployment rate of all states.

WA’s economic performance improved, with labour and trade the major drivers. Tasmania’s performance accelerated slightly, while NT’s momentum fell to a level slightly above neutral. The ACT saw a sharp rise in performance.

The ANZ Stateometer is a set of composite indices that measure economic performance across Australia’s states and territories.

For each jurisdiction, the index extracts the common trend across multiple indicators (between 24 and 32, depending on data available in the jurisdiction). The economic indicators are monthly data series and cover the consumer, business, housing, labour and trade sectors.

We smooth each index by reporting the three-month average of each series.

The ANZ Stateometer is correlated with broader measures of economic activity, like state final demand, but wasn’t designed to forecast these series.

This story is an edited excerpt from the latest ANZ Stateometer Report, published May 19, 2022.