Australia’s states moved into a strong position in the three months to June, ANZ’s Stateometer shows, ahead of the lockdowns of Q3.

Economic growth held strong across Australia’s states and territories in the three months to June, the ANZ Stateometer Index found, ahead of the wave of lockdowns seen early in the third quarter.

This strong position and robust momentum is likely help mitigate the direct and indirect impacts of the economic shock to be seen in the next edition.

The pace of growth in all states and territories accelerated above trend in the second quarter of calendar 2021, the ANZ Stateometer showed.

As the Stateometer is based on an annual comparison of indicators, the sharp downturn in the second quarter 2020 means the base effects are very strong for the corresponding period in 2021.

Broad-based strength was seen across the board in the labour market and consumption also accelerated. Housing broadly consolidated and trade expanded.

New South Wales and Victoria outperformed other regions, partly due to their greater weakness in the second quarter of 2020. The territories lagged, which is in large part a reflection of their resilience during the national lockdown.

Retail consumption was strong, although the third quarter has started off on shaky ground, as many parts of Australia came under varying degrees of lockdown.

Mobility in Sydney and Melbourne was down, according to the Stateometer, close to the record lows of 2020. But the experience of previous lockdowns shows activity and mobility are fairly quick to normalise once they’re over. 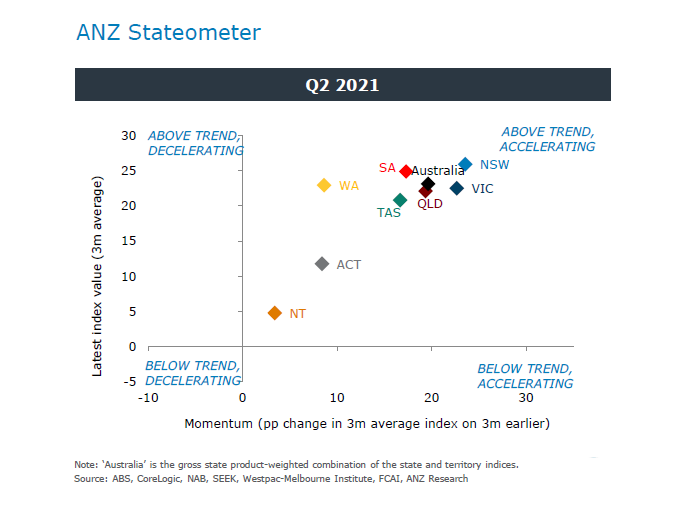 The labour market recovered quicker than expected from the weakest point in 2020, with only the ACT seeing higher underutilisation in the second quarter when compared to pre-pandemic.

In locked down NSW, Victoria and the ACT, the momentum should underpin a speedy recovery in the labour market once restrictions ease. And the strength in other states should offset some of the employment losses expected in locked down areas.

Among other regions, economic momentum was strong in Queensland’s economy, while in South Australia, all segments of the index saw sequential improvement.

The Western Australia economy sustained its strong momentum, growth in Tasmania accelerated and remained above trend, and the Northern Territory’s economic performance improved, albeit less quickly than its peers.

The ANZ Stateometer is a set of composite indices that measure economic performance across Australia’s states and territories.

For each jurisdiction, the index extracts the common trend across multiple indicators (between 24 and 32, depending on data available in the jurisdiction). The economic indicators are monthly data series and cover the consumer, business, housing, labour and trade sectors.

Developments across this diverse country are rarely uniform and we hope these geographically specific indices help you to see through the haze of state by state data and more intuitively piece together the state of the national economy.

This is an edited version of an ANZ Research report. You can find the original report HERE.