Different starting points for inflation and wages go a long way to explaining the different policy stances of the reserve banks of Australia and New Zealand.

ANZ Research has forecast the RBNZ to lift its Official Cash Rate (OCR) 25 basis points to 0.50 per cent in August. From there we expect it to tighten steadily until the OCR reaches 1.75 per cent by the end of 2022.

In contrast, the RBA is expected to leave its cash target at 0.1 per cent until the second half of 2023. A couple of rate hikes over that period has the RBA target cash rate at 0.5 per cent by the end of 2023. Market pricing tells a similar story out to mid-2022.

It is the policy lag that stands out more than the gap.

Over the last 20 years there has, at times, been quite large gaps between the RBNZ’s and RBA’s cash rates. But there has generally been a close correlation in terms of the direction, with the cycles broadly in sync. 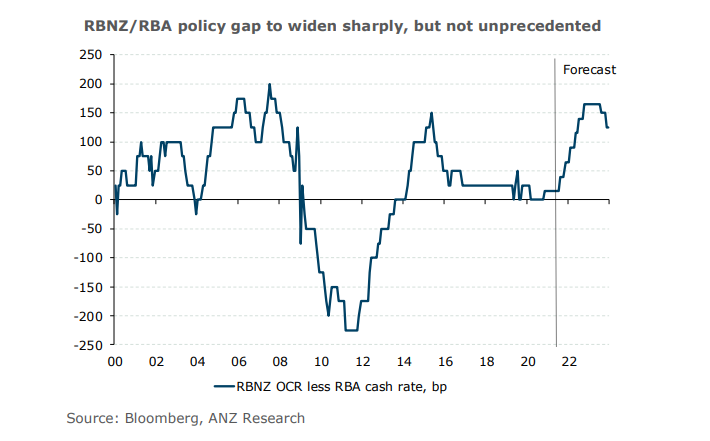 At 24 months (August 2021 versus August 2023, respectively), the current lag between the first moves of each central bank would be the longest since 2000 (noting the RBNZ only shifted to using a formal cash rate in early 1999).

Of course, the fact the timing gap is expected to be the longest ever doesn’t mean the forecasts are wrong. The RBNZ has started a cycle ahead of a move by the RBA three times since 2000 (ignoring the hike in 2010 that was quickly reversed following the Christchurch earthquake).

Only the post tech-wreck/September-11 hike in early 2002 provided a leading signal on the RBA’s next move.

In contrast, the RBA subsequently moved in the opposite direction to the RBNZ’s moves in 2003 (RBNZ easing, RBA hike) and 2014 (RBNZ hike, RBA cut). So, early RBNZ moves have not historically provided a particularly useful lead on what the RBA might do next.

In short, every situation is unique, and there are many unusual aspects to the current situation.

While both Australia’s and New Zealand’s economies are facing shipping disruptions, labour shortages and other inflation drivers, there are also idiosyncratic factors.

It is not out of the question for the RBA, considering Australia’s current lockdowns, to follow an August rate hike by the RBNZ with a decision to delay the tapering of bond purchases scheduled for September. Such a decision would represent an easing in policy relative to the RBA’s currently intended settings.

This near-term wrinkle in the policy outlook aside, the risks seem weighted toward convergence in the timing and/or the magnitude of the gap. For example, the RBA may well end up tightening earlier than either we or it expects, or the RBNZ may end up with a very stop-start tightening cycle compared to our forecast if the New Zealand economy stutters or the New Zealand dollar soars.

To better understand why the lag exists – not just in ANZ Research’s forecasts but also in central bank rhetoric and market pricing – we need to consider the economic circumstances facing each central bank and the framework each is applying to those.

Data in NZ in July showed the headline inflation figure blasting through the top of the RBNZ’s target band, to 3.3 per cent. ANZ Research is forecasting inflation to lift to 4.2 per cent year on year in the third quarter, with non-tradable inflation (the persistent type) in the driver’s seat.

Unlike the RBA, the RBNZ tends not to be prescriptive about a required rate of wage growth. While we’ll have to wait until August 4 to get updated wage data, recent anecdotes are startling. And for good reason: the labour market is as tight as it has been in decades, as measured by the ratio of job ads to the number of registered unemployed.

ANZ Research expects the unemployment rate fell to 4.5 per cent in the June quarter, but even if it stayed at 4.7 per cent, this tightness indicator would still be at a record high.

But the story for core inflation looks very different. After surprising to the low side in the first quarter, ANZ Research expects Australia’s core inflation to accelerate in the three months to end June; but only to 1.5 per cent – around half the pace of NZ.

Even with a large positive surprise, it is hard to see core inflation exceeding 2 per cent, year on year, which would mean that the long period of below-target inflation will continue. This fact is apparent to the RBA, which explains why it is emphasising a desire to see inflation sustainably above 2 per cent before lifting the cash rate.

But that alone is not enough. The RBA will likely want to see inflation closer to 2.5 per cent before it tightens, to ensure that inflation remains sustainably above 2 per cent in the face of higher interest rates. The central bank has made wages growth central to its concept of what constitutes sustainable inflation. Though wages growth has picked up faster than the RBA expected, it is still a long way short of this level.

ANZ Research expects wages growth to reach 3 per cent by the end of 2022, but the RBA is likely to wait some quarters before reacting, to ensure this rate is sustainable. Hence ANZ Research’s view that the RBA will move the cash rate in the second half of 2023. This is ahead of the RBA’s current forward guidance, which is focused on 2024 as the start date for the increase in the cash rate.

This doesn’t mean policy will be static until then. The RBA may start tapering its bond purchases in September, though recent lockdowns have put that timing in doubt.

A key signal of the RBNZ’s view of the economic and policy outlook is its approach to quantitative easing. In July it announced QE would end before the end of this month. In contrast, the RBA plans to slowly taper its QE program.

The RBA will reduce the current $A5 billion per week of bond purchases to $A4 billion in September. But even this modest reduction is threatened by the resurgence in COVID-19 cases. A delay to tapering is likely to be discussed at the RBA Board’s August meeting, though it is too early to conclude that tapering will be delayed.

Still, the fact the RBA hasn’t begun to scale back its bond purchases means a move in the cash rate is some way off. It will likely want to end QE before it moves on the cash rate.

The different expectations for the two countries’ policy rates will cause challenges. For the RBNZ, the risk of ‘going it alone’ is that the $NZ could head skywards as global investors rejoice in a positive low-risk return on their money. Such a move would feed back into the RBNZ’s economic outlook and challenge at least some of the rationale for rate hikes.

For the RBA, the risk is that investors may be more likely to decide it is behind the curve, which could prematurely tighten monetary conditions. We’ve already seen RBA market expectations on occasion shift in response to hawkish RBNZ rhetoric – a case of the tail wagging the dog.

With the New Zealand and Australian economies being buffeted by such similar forces, it is natural to ask whether they can both be right. Certainly, the risks do seem to be skewed to the gap not widening as much as ANZ Research, and the two central banks, currently expect.

Should it turn out that the inflation shock fades as unsustainable growth drivers dissipate, the RBNZ could find a very stop-start cycle is in store. And of course a large negative shock could see rates cut again.

If the RBA experiences strong upward surprises to core inflation and wages, it will be difficult to argue that the policy rate needs to remain on the floor for so long.

Sharon Zollner is Chief Economist, NZ and David Plank is Head of Australian Economics at ANZ

This is an edited version of an ANZ Research report. You can read the original report HERE.