Australia’s major projects pipeline is expected to peak at $A95 billion per year, despite difficult conditions.

Australia’s major project activity will continue to weather difficult external conditions over the next two years, rising to a potential peak of around $A95 billion per annum between 2023-24 and 2025-26.

The peak – slower but longer than the 2021 estimate amid ongoing supply constraints, COVID disruptions and severe weather events – will be driven in part by public-sector backed investment, largely in transport. Major hospital investment is also rising rapidly.

According to ANZ Research’s latest Australian Major Projects report, Australia’s pipeline of resources industry work is not expected to peak until the middle of the decade.

Changing policies are likely to boost the electricity pipeline, supporting investment in major renewables, transmission and storage projects. The resources pipeline has firmed and a very tight metals markets should spur increased mining investment for other minerals.

Commercial property investment is expected to recover, at least partially, over the next two years, but structural changes in the industry mean risk remains high. 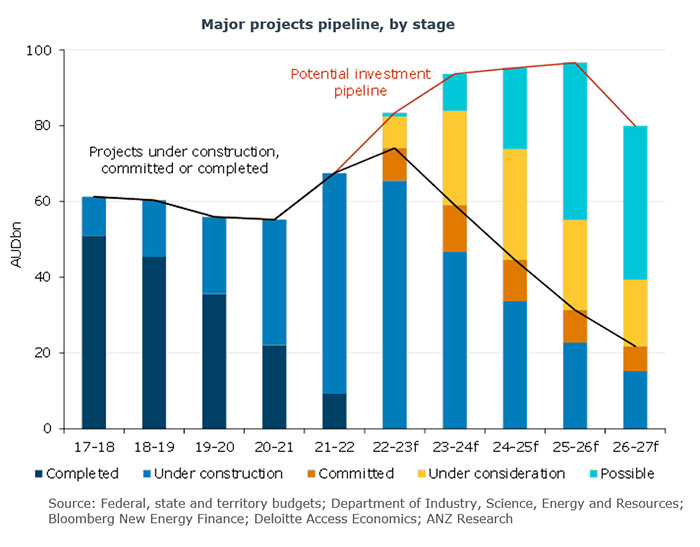 The report showed activity in Australia’s major projects sector - defined as projects valued at $A100 million or above - rose by an estimated 22 per cent across the 2021-22 financial year. Cost escalations were a factor in the increase. Rail was the biggest driver, with roads, hospitals and electricity also contributing.

All states and territories are expected to see major project investment rise strongly over the next two to three years, aside from Western Australia, which outperformed in 2019-20 and 2020-21, on the back of several multi-billion-dollar iron ore projects.

There are some encouraging signs supply constraints have started to ease. ANZ Research suspects overall inflation may have peaked for construction inputs - but does not expect prices to return to anywhere near previous levels.

Constraints are clear: labour markets have tightened significantly, energy and material prices have spiked, and shipping costs and delivery times have blown out. In the second quarter of calendar 2022, 90 per cent of construction firms reported labour was a constraint on output, according to NAB’s business survey. Capacity utilisation was above 85 per cent.

Despite the huge pipeline, particularly across residential and infrastructure, AiG’s Performance of Construction Index is in contractionary territory, while the input price index is near series highs.

Australia’s producer price index (PPI) was up around 9 per cent year on year for engineering construction in second quarter, easily exceeding the overall PPI (5.6 per cent year-on-year) and CPI (6.1 per cent).

Construction insolvencies were 11 per cent higher in the second quarter of 2022 compared with the same period in 2019. While many are in the residential sector, the challenge of fixed price contracts in an environment of extreme input price growth is not isolated.

Some inputs, like oil, are experiencing outright deflation. While overall inflation may have peaked for construction inputs, there will be volatility, and ANZ Research does not expect prices to return to anywhere near previous levels.

One reason for this is even as supply chains normalise, demand will continue rising strongly, requiring supply to catch up. Not only is there a synchronised upswing in demand for infrastructure domestically but global competition for the limited pool of workers, materials and equipment is also increasing.

The significant drag on China’s economic growth from COVID-19 restrictions has prompted the Chinese government to frontload infrastructure projects, including investment in renewable energy and smart grids.  Plans in the US and Europe will release trillions of dollars in infrastructure spending over the medium term. This will put upward pressure on input prices.

Globally, the acceleration in decarbonisation plans will add to infrastructure activity. In Australia, rebuilding after widespread flooding earlier in 2022 is also adding pressure. One headwind is rising interest rates, which increases the cost of debt, and tightens access to finance.

Catherine Birch is a Senior Economist at ANZ

This story is an edited excerpt from the Australian Major Projects September 2022 Report, published August 17, 2022.