Australia’s major project activity faces a potential peak of around $A96bn in 2023-24, but lingering impacts of the pandemic will continue play a role.

Australia’s major project activity is set to rise over the next three years to a potential peak of close to $A100 billion, but the ongoing impacts of the pandemic pose a near-term risk.

Hitting that mark would require average annual growth of almost 20 per cent across the surveyed projects. As predicted in February, ANZ Research does not expect the pipeline will be fully realised – although a strong rise looks inevitable.

According to ANZ Research’s latest Australian Major Projects report, activity on projects worth $A100 million or more could expand to a combined value of around $A96 billion in 2023-24.

While the ramp-up in the pipeline appears slower than previously projected, near-term risks remain. The spread of COVID-19’s Delta strain has delayed the return of some certainty to the outlook.

Extended lockdowns in major Australia population centres are restricting construction activity during the current third quarter, likely putting an end to the acceleration of growth in total non-residential construction work done in the first half of 2021.

But, in a positive sign, businesses are pretty confident about the private capex outlook for 2021-22, Australian Bureau of Statistics data show.

ANZ Research remains concerned about Australia’s capacity to realise such a large volume of work, particularly in the public sector backed mega-projects valued at $A1.8 billion and above, and there are risks of further delays and cost escalations on key projects.

There are also supply-side challenges, with many countries investing in infrastructure to support the economic recovery from the pandemic. This is increasing competition for the limited global pool of workers, materials and equipment. 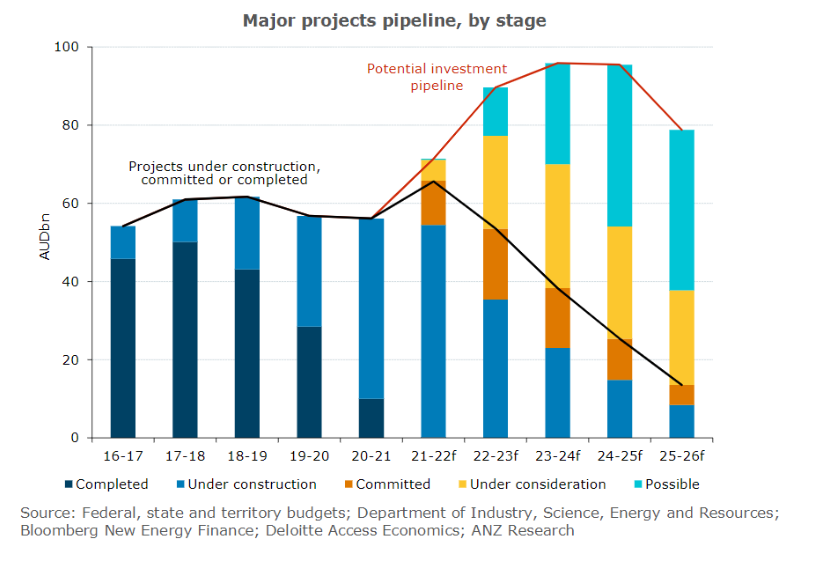 Even when Australia reopens its international borders, this level of competition will make it harder to attract the skilled and experienced workers needed. Global supply chains are also facing recurrent disruptions from COVID-19 outbreaks, and these are unlikely to disappear anytime soon.

The projected expansion in the major projects pipeline over the next three years is underpinned by broad-based growth across transport, electricity, resources and hospitals.

Governments are planning a sharp increase in overall infrastructure investment in 2021-22, but actual activity could again undershoot budget estimates, particularly given the latest lockdowns in Sydney and Melbourne. A number of major hospital projects have been brought forward.

Uncertainty about the way businesses and households will operate and behave when lockdowns end is weighing on the major project pipeline of non-residential buildings. Commercial building approvals are well down on pre-pandemic levels, and work yet to be done has been trending down over the past year.

Despite the increased popularity of working from home, though, the pipeline of potential major office projects looks robust.

Catherine Birch is a Senior Economist at ANZ

This story is an edited excerpt from the Australian Major Projects September 2021 Report, published September 16 2021. Click HERE to read the full document.