Don’t write off Asia just yet

Asia is facing a shortage of confidence by foreign investors. But sentiment can be fickle.

Signs of a crisis in Asia may be misleading.

But ANZ Research sees this as a temporary setback. There is unlikely to be the kind of deep economic contraction seen in the second quarter of 2020. Even the current slowdown in China should be viewed as a normalisation of growth towards trend.

Despite this, foreign equity outflows from Asia so far this year are at levels usually associated with a crisis. What Asia is experiencing looks more like a shortage of confidence by foreign investors. But sentiment can be fickle.

With the region’s vaccination pace picking up and China opting for growth stabilisation under the notion of cross cyclical adjustment, a turnaround in portfolio flows is likely once the negative narrative starts to fade over the next couple of months.

The Asian region’s success in containing the COVID-19 pandemic in 2020 has not been sustained in 2021, as the Delta variant sweeps through Southeast Asia, resulting in the worst pandemic wave to date.

Governments have re-introduced restrictions which have hit domestic demand, leading to sequential contractions in second-quarter GDP growth across the ASEAN-6 economies. As a result, consensus 2021 GDP growth forecasts compiled by Bloomberg have been adjusted lower to 4.1 per cent. 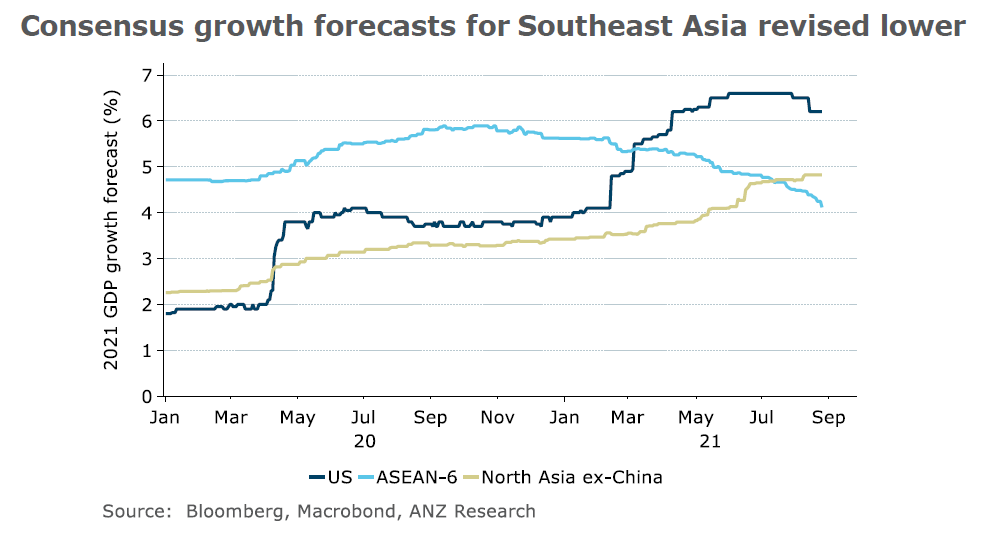 This is still higher than ANZ Research’s recently revised forecast of 3.9 per cent.

Growth concerns have also emerged in China, where data for July revealed a broad-based slowdown in domestic activity, suggesting the economy is rapidly losing steam. Bad weather and a recent COVID-19 outbreak in some regions are some of the reasons for the pullback.

The Chinese authorities’ attempts to rein in excessive credit growth earlier in 2021, which resulted in a sharp turn lower in China’s credit impulse, also contributed to the slowdown. ANZ Research recently revised its 2021 GDP growth forecast for China to 8.3 per cent, from 8.8 per cent previously.

Since May, there has been almost $US28 billion in outflows from regional bourses, taking the year-to-date total outflows to over $US42bn. The recent regulatory crackdown in China against fintech companies has also contributed to the outflows, as the selloff in Chinese equities spilled over into technology companies in the region.

In addition, part of the outflows is also due to expectations that the US Federal Reserve is set to announce the start of tapering of their bond purchases.

While some investor caution towards the economic outlook is warranted, especially in light of the pandemic spread in the region, the extent of the foreign outflow seems excessive.

The size of the outflows seen this year usually stems from some kind of major economic or financial crisis. Even at the height of the US-China trade war in 2018, Asia did not witness similarly large outflows. In addition, the risk premium priced into Asian currencies – at least relative to the US dollar – is sizeable.

Even the slowdown in China should be viewed as a normalisation of growth towards trend. Under the flagship ‘cross-cyclical adjustment’ approach, China’s policymakers will smooth the growth profile over the next few quarters, and we expect the People’s Bank of China to adopt a measured approach towards further rate cuts. 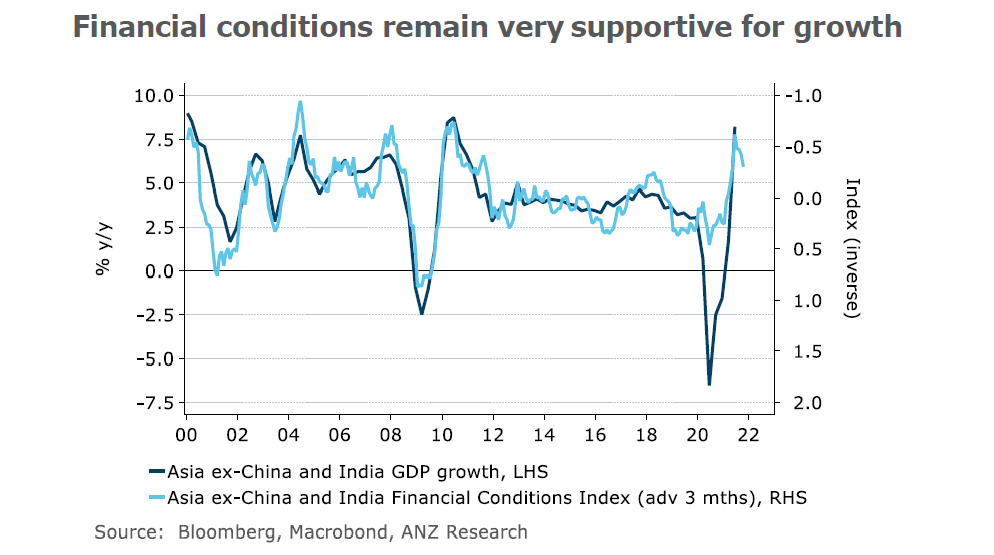 Overall financial conditions in the region remain very supportive of growth. The ANZ Asia Financial Conditions Index has seen a slight tightening recently, but is still at very favourable levels. This provides confidence that economic activity will rebound once current restrictions are eased.

How soon and the speed at which restrictions will lift is dependent on vaccination progress and success in bringing down the number of new infections. Good progress is being made on vaccination in some countries.  India, which saw daily COVID-19 cases peaking at 400,000 in May, has successfully brought case numbers down and Indonesia is making good progress in reducing new infections as well.

ANZ Research believes the current negative foreign investor sentiment towards Asia is set to turn. The US Federal Reserve’s tapering may be drawing closer, but the region’s fundamentals are in much better shape and we will not see the kind of volatility experienced in 2013.

There will be no US dollar shortages in the region, given robust current account surpluses and the ability to draw on swap facilities with the Fed.

Once COVID-19 cases start to fall and vaccination rates increase more meaningfully in countries that are still lagging behind, the stage will be set for an easing of restrictions that will lead to a rebound in both economic activity and investor confidence towards the region.

Khoon Goh is Head of Asia Research at ANZ

This story is an edited excerpt from an ANZ Research report. You can read the original report here: Asia Macro Weekly: negative sentiment towards Asia is unwarranted, August 27 2021.