ANZ Research expects a reduced deficit, but still strong spending to be unveiled in the upcoming Australian Federal Budget. The fiscal settings come amid a much-stronger economic backdrop than present amid the 2020 budget and MYEFO.

There will be an overall reduction in total spending from the effect of the automatic stabilisers more than offsetting the lift in discretionary spending, but the Australian government’s lower target for unemployment confirms the upcoming budget will be one with plenty of discretionary spending.

ANZ Research continues to expect both a lift in discretionary spending of around $A10 billion and an improvement in the deficit of around $A40 billion for 2021-22. The forecast cumulative fiscal deficit is expected to be $A130 billion better over the four years from 2020-21. 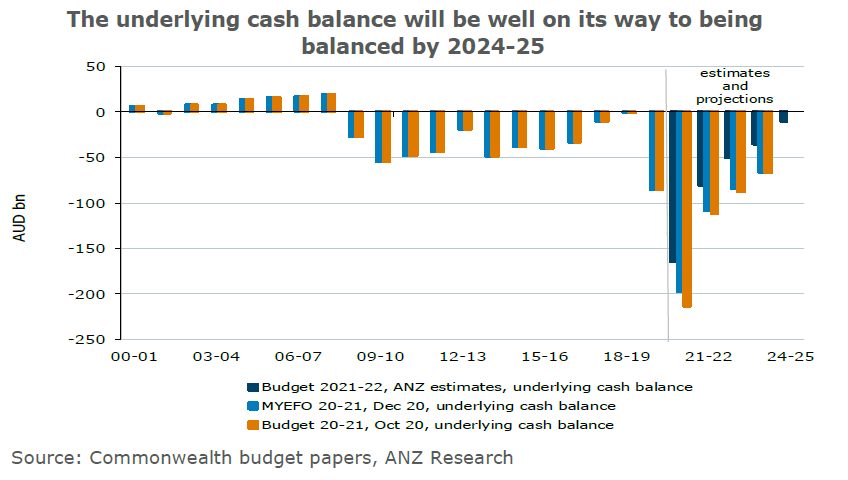 A recent speech by Australian Federal Treasurer Josh Frydenberg laid out a shift in the fiscal strategy from the government. The key adjustment was to delay returning to fiscal repair until the unemployment rate was even lower than prior to the pandemic.

Previously the switch to fiscal repair was when the unemployment rate was ‘comfortably below 6 per cent’. The Treasurer also mentioned Treasury’s estimate for full employment is now between 4.5 per cent and 5 per cent, so ANZ Research thinks below 5 per cent is what the government is currently thinking for its target.

This suggests the government will maintain a more aggressive level of spending for longer. ANZ Research had already factored in a significant lift of around $A10 billion in the upcoming budget, plus an extension of the low income tax offset for one year.

The new unemployment target adds credence to this view. However, the recent spending announcements do not suggest a need to upgrade this estimate.

On face value, if ANZ Research’s estimates are correct, the budget will represent a relatively sharp tightening in fiscal policy. In 2021-22 government spending will be contributing less to GDP growth than it was in 2020-21.

What’s more, this contribution has fallen since MYEFO notwithstanding the expectation of new spending. This is reflected in a lower estimated spending to GDP ratio compared to MYEFO.

This measure doesn’t fully capture the economic backdrop this budget is being delivered into, however. The stage of the economic cycle should be considered when thinking about how stimulatory fiscal policy is.

For example, spending an additional 3 per cent of GDP when the economy is growing above trend arguably represents considerably more aggressive fiscal policy than the same commitment amidst a recession.

However, even without going down this route, ANZ Research believe the budget will still represent an expansionary policy when considering the economic backdrop and outlook.

With spending set to be around 28 per cent of GDP, much higher than the long run average of just under 25 per cent, this will be a very expansionary budget given the state of the cycle.

The unemployment rate was forecast to average 5.25 per cent over the next two years in the 2019-20 MYEFO. However, the level of spending was much lower - with the payments to GDP ratio forecast to average 24.6 per cent compared with our estimate of 28 per cent for this coming budget.

More broadly, looking at the planned average spending to GDP ratios from each budget over the last two decades shows this budget is still likely to be very expansionary.

ANZ Research thinks the payments to GDP ratio is a more appropriate way to consider the fiscal stance than looking at the change in spending or the movement in the fiscal balance.