Budget shows strong commitment to spend until unemployment is below pre-COVID-19 levels.

This is very different Australian Federal Budget to what many expected. The Australian government has announced new spending worth $A95.9 billion over the five years from 2020-21 - which is almost enough to offset the improvement in the fiscal position of $A104.3 billion from the stronger economy.

This level of spending, despite the strong economic recovery, was a surprise to ANZ Research and shows a strong commitment to a new fiscal strategy of continuing to spend until the unemployment rate is below where it was prior to the pandemic. 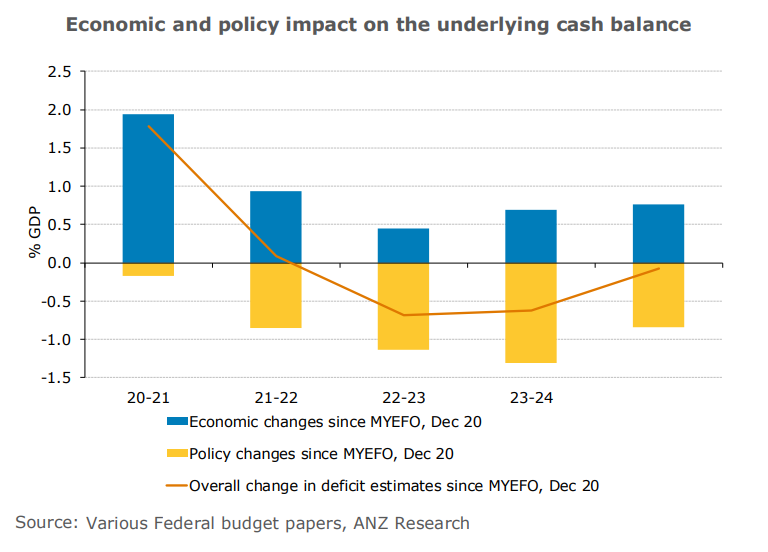 The level of spending creates upside risk to the growth outlook, which is intentional. But it also increases the risk of overheating down the track. It will do little to dissuade the market from thinking Reserve Bank of Australia rate hikes will come sooner than 2024.

As a consequence of the additional spending, the improvement in the fiscal deficit is much less than expected. The underlying cash balance for 2020-21 is expected to be a deficit of $A161 billion (a fall of 7.8 per cent of GDP).

Relative to the 2020-21 mid-year economic and fiscal outlook (MYEFO), this is an improvement of just $A7.9 billion over the forward estimates. From 2022-23 onwards, the deficit is actually forecast to be larger in each year than at MYEFO.

Foot on the pedal

The better economic outcomes in 2020-21 mean Australia’s payments-to-GDP ratio is forecast to peak at 32 per cent of GDP, down from 33.5 per cent at MYEFO. However, the boost in spending means beyond this the ratio is largely unchanged. Given the much better economic outlook, this level of spending represents a very expansionary fiscal setting.

Receipts, on the other hand, are up around $A82 billion compared with MYEFO, yet as a share of GDP they are lower than at MYEFO. ANZ Research thinks the tax forecasts are very cautious and there is upside risk going forward. It wouldn’t shock to see smaller-than-forecast deficits at MYEFO.

The economic forecasts underpinning the budget appear quite reasonable. For 2021-22, the government expects real GDP to grow by 1.25 per cent, broadly in line with ANZ Research and the RBA’s estimates.

For nominal GDP - the key parameter for the deficit - the government’s forecasts are generally conservative. For the 2020-21 year, the numbers are broadly in line with ANZ Research (3.75 per cent vs 3.5 per cent), although they are a considerably lower in 2021-22 (at 3.5 per cent vs 6.4 per cent), with the underlying expectation the terms of trade fall a sharp 8 per cent. A further forecast decline in 2022-23 is expected to weigh on nominal GDP.

Treasury has significantly upgraded its labour market forecasts since MYEFO in December. The unemployment rate is forecast to fall to 5.5 per cent in the second quarter, almost 2 percentage points lower than the 7.25 per cent forecast at MYEFO.

This will be helped by slow labour force growth, largely due to closed borders restricting population growth, but also due to assumptions of a flat participation rate.

Taken together with the CPI inflation forecasts, this also means the government expects flat to falling real wages at least until 2024-25.

Capital spending for 2020-21 through to 2023-24 is almost unchanged on the 2020 budget, though as a share of GDP it is lower in the earlier years. Though mostly unchanged at the headline level, compositionally there has been some change.

This is an edited version of an ANZ Research report